The ‪#‎1000Speak‬ day of compassion -compassion awareness- is here! On the 20th, (which for some of us is now) bloggers from around the globe will be posting their stories and thoughts about compassion. I hope you are blessed enough to read many of them, all of them!

I also hope you join us in spreading this message of compassion. Sometimes it’s easy to find ourselves wondering if there is any compassion left in this world . . . there is and it is beautiful.

Help us reach as many hearts as we can by sharing, liking, and tweeting the #1000Speak posts you come across.

Be a part of compassion in action!

~ I hope you come back and visit me throughout the day ~ I’ll be sharing more of my own thoughts on compassion, I’d love to share them with you . . .

I am a consummate people watcher, seeing people outside of their inner circles, their comfort zones, and their safety nets while out shopping and running errands is fascinating. People tend to be at their most real when out and about, alone, without putting on pretenses for the people they are closest to. The masks so many of us often wear come off and the trueness of self shows.

It’s not always pretty what lies beneath.

Some people wear their compassion on their sleeve for all to see. It is simply who they are. Others wear it as a mask they sometimes forget to hide behind.

“Compassion asks us to go where it hurts, to enter into the places of pain, to share in brokenness, fear, confusion, and anguish. Compassion challenges us to cry out with those in misery, to mourn with those who are lonely, to weep with those in tears. Compassion requires us to be weak with the weak, vulnerable with the vulnerable, and powerless with the powerless. Compassion means full immersion in the condition of being human.” Henri J.M. Nouwen

I know of a man who gave of what he had; he gave generous donations to charities, he dropped off no longer needed items to be delivered and dispersed among the needy. He gave, and he gave often. Most saw these actions as the good works of a compassionate man leading an altruistic life.

To the ones benefiting from his philanthropic endeavors he was exactly those things, but he did these things not out of compassion as much as he did them for the accolades and the nice tax write-offs he received. In his daily dealings he was cold and selfish. He would walk past a thirsty man without giving a second glance on his way to buy an expensive cup of coffee, and he did just that almost every day. 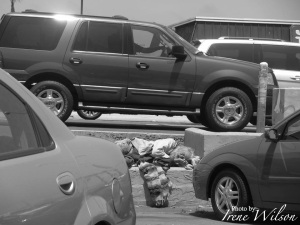 I know of another man; he used to sit on the corner by that same coffee shop the wealthy man frequented, he never asked for anything. He sat there at the corner, watching people go by, accepting whatever kindnesses they offered. He was gracious with his gratitude when they stopped, he always said “God bless you as He has blessed me.”

If a kind stranger brought him something to eat or drink from the coffee shop, he gave the first portion of it to his little dog, his best friend. If you asked him what he would like, he’d say his pooch would love a sip of water and if they have any world peace, he wouldn’t mind a bit of that. Mostly, he just wanted someone to sit and chat with him a while. I have a feeling if he saw someone walking by without shoes, he would have offered them his own.

He was a compassionate man. I don’t see him there at the corner by the coffee shop anymore, I often wonder where he is and hope wherever it is, he is warm and happy. Sometimes, I get a little emotional when I look over to where he used to sit, singing old church hymns and petting his little dog.

I think about all the people who walked right by him, who looked his way and never saw him. I’m sure most were wonderful people, perhaps kind and compassionate in many ways, but they walked by him. Purposely not looking. If they could have done nothing else for him, a smile may have been just compassionate enough to ease the trials he had to endure that day.

“If we have no peace, it is because we have forgotten that we belong to each other.” Mother Teresa

The man in the fancy suit who wrote monthly donation checks is just a small dot in my memory, he has no face, no name, no real reason for being in my mind except to serve as an example of what compassion is not.

The other man, his name was Jesse and I can still see his sweet smile when I think about him. The one who had

nothing to give gave more than the man in the fancy suit will likely give in his entire lifetime every time he said, “God bless you as He has blessed me.”

People seem to think it’s some enormous endeavor, when really, it’s quite simple. You do what you can for others when you can, with what you have and if all you have is a smile and a prayer, give it to them. Give it to everyone.

“Too often we underestimate the power of a touch, a smile, a kind word, a listening ear, an honest compliment, or the smallest act of caring, all of which have the potential to turn a life around.” Leo Buscaglia

There is no such thing as someone unworthy of our compassion, maybe the ones we feel the most unworthy recipients are the ones who need it the most, if for no other reason than to keep our hearts from becoming jaded, cold, and cruel. For this reason, I still pray for the man in the suit and hope he too, is warm and happy.

“Doing nothing for others is the undoing of ourselves.” Horace Mann