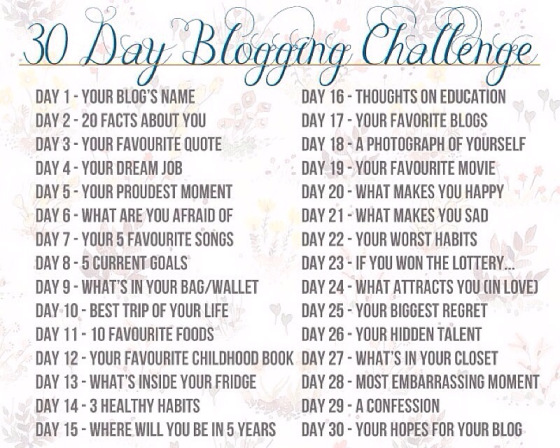 OK – I haven’t stopped writing, that would be like consciously making the decision to discontinue breathing, but I haven’t been writing much, or at least nothing I’ve deemed worthy of sharing. I’ve been reading and doing yard work and laundry and reading and helping my boys look for work and wrestling with health issues and reading and drinking way too much coffee. The words I wish to wrangle to a page are being stubborn and scattering themselves in little pockets of jumbled knots in the deepest recesses of my overwrought mind.

In an effort to jump-start my creativity, if indeed it still exists, I began searching for writing prompts, something I’ve never really done, and I came across this 30 day blogging challenge. I wasn’t sure if I was up for a challenge, but the topic for day one is something I’ve already written, so a little copy and paste is getting me started. Cheating? Perhaps, but I prefer to think of it as a baby step, one tiny, teetering step toward something more . . . besides, writing this little intro has got to count for something, yes?

Alright then. Day One – Your Blog’s Name – Easy peasy. That’s not my blog name, but then I’m sure you know that. Below you will find my cheeky explanation to the question at hand . . . 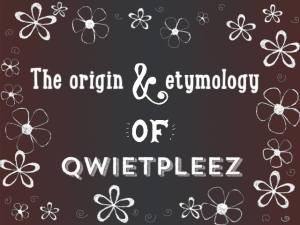 I’ve been asked several times why my blog is called The Qwiet Muse, and have also recently been informed by a few folks that I spelled quiet wrong, (just in case spell check didn’t catch it). So sweet. To put those helpful minds at ease, I spelled it that way on purpose. Spell check has been my saving grace on many occasions, however, this one I fought it on.

Words, as you know – must know, or should know, often have more than one meaning; you may think of the word muse and envision some mystical, magical creature of beauty floating overhead, gently guiding along inspiration. But believe me, if some ghostly apparition ever stops by for a brainstorming session, I’m outta there. I’m running and writing about it later (and elsewhere).

Muse can also be defined as an instance or period of reflection, a source of inspiration . . . My particular muse comes from everything around me; my faith, my family, my friends. My muse exists in all the wonders of God’s creation and in my unique human experience.

The Qwiet Muse is a reflection of me. It’s derived from my original screen-name, qwietpleez, and muse for my inspiration; the reasons I write.

Onto to origin and etymology of, ‘qwiet‘ –

qwi-et [kwahy-it] adjective. Basic definition – the same as quiet. It’s the same word, with the obvious distinction of containing a W in place of the U.

verb form
* to make qwiet: Qwiet down in there, or else!
* to make tranquil or peaceful; pacify: to qwiet a crying baby.
* to calm mentally, as a person: There, there, be qwiet now.
* to silence: Qwiet!

*credit and apologies to dictionary.com

In the summer of 1997 a young mother (me) was creating her first AOL.com email account. Her beginning attempts all failed, the names she chose were unavailable. She wanted something witty, something fun, and memorable. After several hours and many unsuccessful attempts, her frustrations began to rise, as did the playful rambunctiousness of her children.

Her attempts at quieting them were equally unsuccessful. Finding it increasingly hard to think, she found herself repeatedly requesting silence. Calm down, lower your voices, hush, go to the other room, knock it off, zip it, chill out, and other such requests went ignored.

Her final, shouted request, not only stilled the room of sound (for a moment), but became her victory at the keyboard as well.

She was filled with trepidation, dreading another ‘unavailable’ message but she pressed on, one key after the other. Q w i e t p l e e z. This was it. It was perfect. Her finger hovered over the enter key, she closed her eyes and pushed it. When she opened them, the message said ‘success’!

So there you have it . . . oh, by the way. I realize please is spelled wrong, I like it that way.