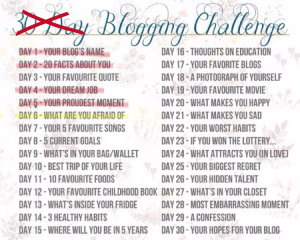 Back to the blasted blogging challenge. I’m now on day six (and I started like, 300 days ago). From this point on, I’m replacing ‘day’ with ‘number’ because I am quite obviously incapable of maintaining a daily challenge. Well, that’s not true, I’m capable of it, I’m just too lazy to commit myself to the task. That’s not entirely true either, I’m not lazy, per se, just otherwise occupied. Sometimes it’s housework, different writing projects, or other similarly adult type responsibilities, and sometimes it’s reading or word search puzzles, Netflix or nothing in particular.

My prerogative and all that.

So, number 6 on this challenge asks, what are you afraid of? Whew, loaded question. I compiled a list of random fears, in random order –

Clowns
People dressed as clowns
Clowns dressed as people
People (not every people, but people)
Most spiders
Hippopotami
Getting lost
Car accidents
Driving on the highway
Drowning
Heights
Fire (unless I’m playing with it)
Losing the ones I love too soon
Quiet clowns
Electric shock (been there, done that – terrified of it)
Forgetting
Bad hair cuts
Killers
Mean dogs
Bears
Moose (I grew up in Alaska, trust me, they are scary)
Going blind
Killer clowns
Major health issues
Falling
Random acts of violence
Kangaroos (especially those big muscled ones)
Most bugs
Laughing clowns
Spontaneous Human Combustion (when I was ten, I seriously thought this was how I’d go)
Flesh eating bacteria
Large, loud crowds
Being hit by a car
Elevators
Large bodies of water
Running out of coffee (legit fear)
Porcelain dolls
Crying clowns
Children in scary movies
Crap like that bitch that climbs out of the well in The Ring. (I didn’t watch it, but the commercials gave me nightmares)
Uncanny Valley (look it up if you don’t know what I’m talking about)
Intruders (especially if they’re dressed like clowns)

Alright, enough of that. Being afraid sucks and I try not to let myself become lost in it. Fear can control us if we let it. For the most part, I don’t allow it to, but sometimes I guess I do.

The big one I can’t seem to overcome is my fear of driving. Highway driving specifically. I don’t do it. The last time was probably fifteen years ago. Takes away a lot of freedom. I just can’t do it, maybe I don’t really want to because it’s scary and requires pharmaceutical intervention if I attempt it.

Then there is the issue with clowns. It’s funny, but it’s not. A lot of folks are scared of those bastards so I’m not alone in this mostly irrational (is it really irrational though?) fear. Ridiculousness.

Fear is often a liar. It’s a bully and a brute. It makes itself bigger than it deserves to be, like a sheep in wolf’s clothing, and it’s a convincing disguise. It too often keeps us prisoners within ourselves. We wear it like armor to protect us, when all the while, fear is the actual enemy at our door.

In the late 1500’s Michel de Montaigne basically invented the personal essay. In book one of his works, he writes, “C’est de quoi j’ai le plus de peur que la peur.” The thing I fear most is fear.

I suppose I’m with him, perhaps my greatest fear is fear. I’m not sure if it should come before or after clowns on the list, but I do indeed fear it. I fear the powerlessness I feel in it’s shadow. I fear what it can take from me as well as what it leaves behind. I fear the hold it has on others. Decisions based on fear, rational or otherwise, are often made in haste and leave lasting reprocussions in their wake.

I fear the world is cloaked beneath a blanket of fear and because of it, our collective fears are being realized. It makes my list trivial in comparison. Yep, Montaigne got it right, the thing I fear most is fear. Knowing this gives me an advantage though, I can’t fight what I don’t acknowledge. Fear is an idea. A concept. A feeling, right? It’s not like a charging bear or some roided out looking kanga-frickin-roo.

Fear is meant to be fought. We are told and we tell others to face their fears, overcome them, rise above them . . . No one says hide from them, give in to them, or cower before them. But my, what a battle it can be. Suit up, warrior. Toss that white flag aside and practice your battle cry.

I’m going to start small. Maybe I’ll wade out a few steps into the ocean or watch a scary movie. I know not every fear can be conquered and I know fear can actually be a good thing, but not when it doesn’t serve to protect us. Not when it controls us.

6 thoughts on “Crap that scares me, my greatest fear, & suiting up.”