Sometimes, a mishap is simply a mishap, easily fixed and forgotten. Other times, mishap is mayhem in the making, especially when it happens on what is meant to be the most perfect day of your life, the day you’d dreamed about since you were a little girl, the day that will mark the first day of the rest of your life. Your wedding day.

I suppose that’s just a wee bit dramatic, at least for me. I really didn’t have the wedding dreams many young girls seem to have, I honestly never gave it too much though until I knew I was going to be married. Even then, they were simple and sweet. Not too much muss, not too much fuss. Doable. My dream seemed so doable.

Often, the little blunders in life can seem like giant blunders in the midst of the havoc they create, but when the smoke settles and the dust clears, things are often not nearly as bad as they seemed in the moment. We had a bit of a mishap on our wedding day, nothing but our love turned out the way we thought it would.

We stood on the shores of a quiet ocean with soft breezes playfully pulling on my dress and tousling my hair. The warm beach sand beneath our bare feet felt soft as silk as we looked into each other’s eyes and promised forever. He looked regal in his dress uniform, medals twinkling in the fading sun. We sealed our love with a kiss as the sun dipped below the horizon, marking the end of the first day we would spend as husband and wife.

When I close my eyes and remember how I dreamed our wedding would be, this was how I dreamt it. The sun did set beautifully on the day wed, the rest . . . never actually happened. It was supposed to. It was my dream, but planned perfection is never as perfect as you plan it to be. The day ended as it was meant to, we did walk hand in hand into the future as husband and wife, my wedding day woes ended in happily ever after.

We met shortly before I turned sixteen, he was my first love, my only love and my last love. Years passed, we would go our separate ways and return again, but in the end, we decided to take our journey in life together. After a lifetime in Alaska, we decided to marry on a warm and sunny beach in Florida.

My grandmother helped me pick a beautiful dress. It looked as though it were crafted of delicious, silken cream and soft, billowy curtains of cloud. My soon to be husband was to wear his military finest; he was so very handsome when he donned his uniform. My best friend lived in Florida with her baby girl; she offered her tiny apartment as her gift to us. We were glad to have somewhere cozy, and I must admit, inexpensive, to stay.

Our first day there we drove around, seeing the sights and taking in the sun. We gazed upon the beach where we would soon wed. It was an amazing moment in time, surreal and long-awaited. We hardly rested at all that night, in part because we were anxious for morning, and maybe a little due to a bad case of, I don’t want to sleep syndrome, our youngest host seemed to be having.

When the morning came we were weary, but happy and ready to begin the next chapter of our lives together. I pulled my dress from its protective covering, but it no longer resembled silken cream or wispy cloud. It was a wrinkled up and unattractive version of its former self. As tears began to form in my eyes, my almost husband told me not to worry and helped me dry my tears.

We soon set off to find a dry cleaner to press my crinkled and crumpled dress. It was early. It was early on a Sunday morning. After driving to every dry cleaner in town only to see a closed sign on each door, we decided we would have a Monday morning ceremony on the beach instead of a Sunday evening one. The sun would be rising on the first day of our new life instead of setting on it, still sounded beautiful to me.

Planned perfection with a slight detour took us further than I’d expected. We decided we would get our license and set up the ceremony with the Justice of the Peace who would marry us. The office was in a rather run down strip mall. While we waited in line I heard the rumblings from my so, so, soon husband’s stomach, the sound seemed to be echoing my own. My friend’s daughter was on the cranky side from self-imposed lack of sleep, and the poor darling was hungry as well.

By the time we reached the desk she was practically wailing. We filled out the paperwork, signed here and signed there and waited for the woman with the power to place her seal upon it. While waiting, my friend jokingly said, “I’ll give you twenty bucks if you do it right now.” Maybe it was the sleep deprivation, perhaps the lack of nourishment, or the frustration brought about by the demise of the aforementioned planned perfection, but before we knew it, we were standing before a Justice of the Peace in the back of the dingy little office.

As she began, she told us to grasp hands and look into each other’s eyes. This must be code for start crying, because my friend’s daughter began to howl like a banshee, as we waited for her to calm I began to giggle. My love began to giggle. My now crying friend threw her hands up and began to laugh along, thankfully, so did her daughter.

The woman waiting to lead us into wedded bliss was not laughing however. She wasn’t even smiling. I don’t know how, but we made it through our vows, the four of us trying unsuccessfully not to laugh. She pronounced us man and wife and rolled her eyes as she sent us on our way. Unbeknownst to us, we had gathered quite an audience. A few said congratulations, a few refused eye contact and one said “It’ll never last.”, while yet another scolded us, saying, “Marriage is no laughing matter.”

We were married, we were happy and we were hungry. Twenty bucks was just enough to pay the girl at the McDonald’s drive thru window. We spent the rest of our day at Universal Studios and ended it by driving past the beautiful beach I had seen in my dreams. It would have been a lovely wedding.

Of course our parents were about as thrilled as the lady who led us in our vows, we have no wedding pictures aside from one we took in the old-fashioned photo studio at the theme park. We did dress in vintage wedding clothes which were much fancier than the shorts, t-shirts and flip-flops we were actually married in. The pictures we snapped during our day show a young couple having fun, we look happy and although I sometimes wish things had gone the way we’d planned, I wouldn’t trade that day or my memories of it for anything.

I did get a free spa package out of the deal a few years ago from a radio station for sharing my story. It was a welcome bit of pampering. I wish I could find the man who said it wouldn’t last and tell him just how long it has. I wish the woman who told us marriage was no laughing matter could see how much joy those moments of laughter have given us.

Now, my idea of planned perfection is whatever God has in store for us . . . 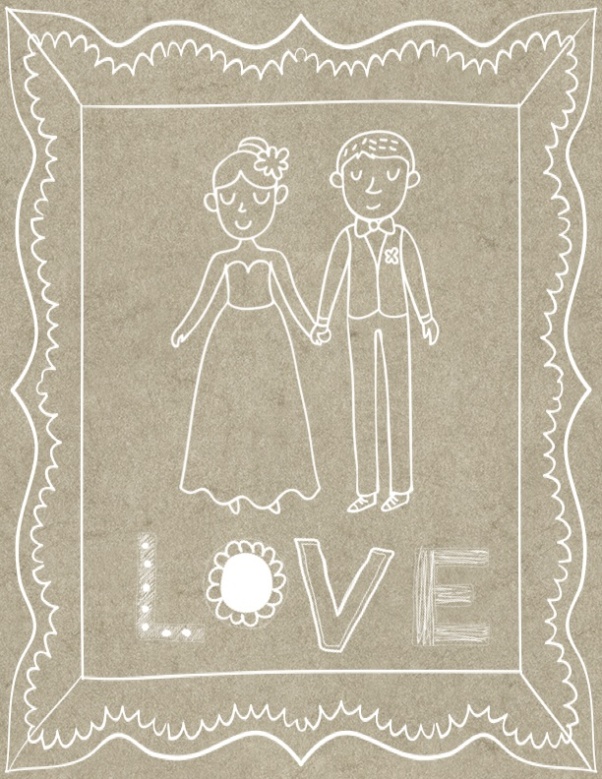