It could be funny story, but it isn’t. I’ve only shared it with a few, and I’ll admit to putting a humorous spin on it a time or two. You can make something sound less awful if you sprinkle in a few laughs and some self-deprecating humor, but that’s like putting extra sweet icing on a dry cake. It goes down a little easier, but it’s still an awful cake.

So no icing this time.

This is a story about the day I realized I needed help. The day I acknowledged I wasn’t okay. I’d known for some time, but I was strong and capable and could do it all, except I couldn’t. I wasn’t. Some days I felt I was unraveling like a spool of loosely wound thread, and others, like a string being stretched to the breaking point. There were days I felt the unraveling and the tautness together, it left me in a jumbled tangle of knots and loose ends that were becoming harder and harder to free myself from.

I had a home I was happy in, four amazing children, a husband I adored, and falling apart was not an option. There was no reason to, I was happy. I had so much to be thankful for, but I was coming undone inside and no amount of positive anything was changing that. There were times I felt unworthy of my blessings. I felt I wasn’t enough. How could I feel that way in the midst of so much joy? 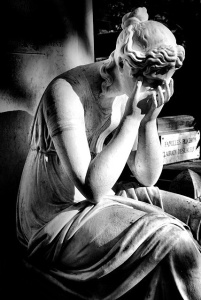 I’ve always been good under pressure, and while there was happiness and joy in my life, there was pressure. There was stress and uncertainty and fear and sadness. My husband was in the military and often away, my oldest son had recently been diagnosed with autism, his brother was being assessed for developmental disabilities. Physically, I was suffering from the effects of what I would soon find out was undiagnosed diabetes, and I was tired. More tired than I had time to realize.

I’ve dealt with anxiety for as long as I can remember, but it was slowly taking control of my life. Everything filled me with dread. The day our home was broken into, the day a stranger came into my refuge and robbed me of so much more than things, was the day I succumbed to the anxiety I’d been fighting for so long. It was the catalyst for what was to come.

I became obsessive about our safety, about locking doors and windows, checking closets and under beds repeatedly. My obsessive monitoring of these things was as intrusive as that stranger that had walked unwelcomed into my home. I looked out the peephole on the front door a hundred times a day. One of those times, not long after the older kids had been dropped at school and I was home alone with my youngest, I saw a young woman making her way up the driveway. I watched her. She came to the door and I held my breath as she reached for the doorbell.

I should have just ignored it. I should have just waited silently until she walked away, but I was unnerved and annoyed. There was a no soliciting sign right above the doorbell and it bothered me so much more than it should have that she rang in spite of it.

I opened the door, she began her well rehearsed pitch for home water delivery service which I interrupted with a polite no thank you. She continued. I could feel my heart speeding up. I pointed to the no soliciting sign and again said, no thank you. She rolled her eyes and I closed the door, but I didn’t walk away from it. I watched her through the peephole. I watched her reach out and peel the sign off the wall and walk away. I didn’t see a young woman. I saw a monster. An intruder. I saw someone violating my home and my peace and my privacy and all the anxiety and anger and fear I’d been trying to contain broke free from its chains and that last bit of frayed thread within me snapped.

don’t remember getting in the car. I do remember stopping the car in the middle of the street on the other side of the block when I saw her at someone else’s door.

I stopped and got out of the car, left it right there, running, with my almost two-year old son in the back seat and crossed the street to confront her. I can’t recall just what I said, I know it was angry and ugly. She denied the deed and I got angrier and uglier. Neighbors on both sides opened their doors to see what was happening. I know I promised to get her fired, I know I told her I wanted the sign back. I know I told her she had ten minutes to return it.

I don’t remember going back to the house or going in, but I do remember thinking I was going to lose what was left of my mind. I do remember the anger turning to fear. Fear of myself. I felt physically ill trying to piece together what I’d just done, realizing I had left my child in the middle of the street in a running vehicle. I was sitting on the kitchen floor in a puddle of tears when the doorbell rang.

She’d actually come back. She could have easily left the sign on the porch, but she rang the bell. I was embarrassed and mortified and unable to stop shaking or quell my tears, but I opened the door. She was shaky as well and her eyes were wet with tears too. She handed me the sign. She apologized. I did too, but my crazy was still showing and I tried to explain things to her. I suddenly felt very maternal towards this young woman. I told her it was foolish to do things like she’d done, that there were crazier people than me out there. I extended the trauma I’d likely caused her with an unexpected hug. This is the part of the story I actually do find sort of funny, in a totally twisted and sad way. That poor girl. I scared her to death and then I hugged her.

When all was said and done, the reality of it all hit me. I was not okay. I am now. I take medication to even out the chemical imbalance that can wreak havoc in my life. I talk to people. Sometimes I’m more okay than other times, but I recognize it now. I don’t ignore the warning signs and I take action to keep myself from falling back into that dark place. I have a greater understanding of depression and anxiety and OCD, and I know without a doubt I am worthy of my blessings.

It took time and hard work to get here though, and I didn’t do it alone. Reaching out and seeking help was difficult. Admitting I needed it was like admitting defeat in the beginning. I’m not real big on talking to people or asking for help, I still struggle with that aspect of it, but I do it because I never want to be that out of control woman who stood in the middle of the street screaming that day again.

There are moments, days, weeks even that I struggle. Times when I have to rely on faith and facts to keep me moving through whatever dark clouds loom above me. Sometimes I forget, or simply choose not to reach out when I’m facing that storm, but thankfully, I have some faithful storm chasers in my life that keep me from being swept away by it.

Depression is a misunderstood disorder. I certainly didn’t understand it. How could I be depressed when I was happy? I smiled, I laughed, I did things. I hadn’t taken to my bed or lost hope, and yet that fog followed me, sometimes I wore it like a shroud, sometimes it was simply a shadow that followed me.

Once I learned it had nothing to do with my strength, my capabilities, or my fortitude it was easier to fight. I had many weapons in my armory, faith, family, friends, but I still needed armor. Medication served as a shield, it didn’t fight the battle for me, I had to do that, but it did offer a buffer between me and the invisible enemy I faced.

It’s been sixteen years since I took up arms and began fighting back. There are days I grow weary of it, but even on those days, the sun still shines and I find my strength. I am the hero of my story.