Sesame Street, episode 0276, aired on November 8, 1971, introducing us to a brand new character by the name of Aloysius Snuffleupagus, who quickly became one of the most beloved characters in children’s programming history.

Snuffy, as he is most often called, was loosely based on a

wooly mammoth, minus the tusks. Snuffleupagus is not only his last name, but his species as well. Most folks call him Mr. Snuffleupagus, but he’ll answer to Snuffy, Snuff, Mr. Snuffleupagus, or Aloysius [al-oh-ish-uh s], which means, famous warrior, though I’m fairly certain Snuffy is a bit too sweet and snuggly to be a warrior.

Mr. Snuffleupagus may have lumbered his way into our hearts 46 years ago, but he is portrayed as forever 4 1/2 years old. The Snuffy we know today, with the fluffy brown fur, puppy dog eyes and amazing eyelashes looked a bit different when he first strolled his way down Sesame Street. He was quickly deemed too frightening for young viewers and the show softened up his look.

Those young viewers, myself included, were the only ones who ever saw Snuff besides Big Bird, the grown ups somehow always managed to miss him and concluded he was nothing more than Big Birds imaginary friend. But we knew better.

By the 17th season of Sesame Street in 1985, the decision was made to reveal Snuffy to the adults, who for years thought Bird, as Snuff calls him, was simply a scapegoat for mishaps and mischief they attributed to their giant yellow friend. So in episode 2096, the truth became known.

The revelation was based on two factors, the writers were

running out of ways to keep the secret going. The grown ups and Snuff had been nearly missing each other for years. There was also a growing concern that the adults refusal to believe Big Bird could have a negative effect on children, specifically, they may get the idea that their parents and other adults might not believe them if they tried to tell them something big.

This decision received mixed reactions. Many of Snuffy’s fans were upset. I was when I heard. I spent my childhood sharing this hilarious knowledge with Big Bird, I felt important because I could see Snuffleupagus. But, I understand their reasonings. I may still be a little bitter about it though. 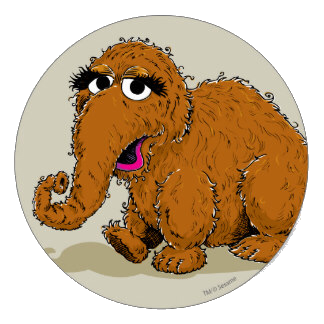 In honor of the big Snuff’s birthday, here are some fun facts about our favorite Snuffleupagus . . .

In 1992 Snuff’s parents got divorced, and Daddy Snuffleupagus moved out, but the episode was never aired and in the show, they are still married.

It takes two people to operate the giant muppet, the front operator also voices the character.

He lives in a cave with his mommy, daddy, little sister

Alice, and his cousin, Señor Snuffleupago.

He set a Guinness World record for the longest eyelashes on any puppet in the world.

He has another best friend aside from Big Bird, Snuffleupagus named Rosalyn.

once travelled there to seek out Mount Snuffleupagus, or Mount Ihu Papa’a Lo’ihi Nui, which is of course, shaped like a Snuffleupagus.

His trunk is called a snuffle.

What’s not to love about this furry, sweet, sort of shy, surprisingly unimposing, innocent, and adorable creature?

3 thoughts on “Celebrating Snuffleupagus, how well do you know him?”