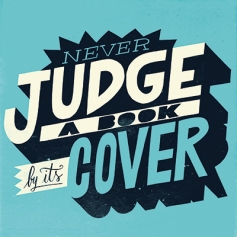 I’ve learned many lessons in life, one of them was to never judge a book by its cover. Sometimes, you flip it over and read the synopsis and it doesn’t sound that bad. You might even read a few chapters before you decide. You might just end up falling in love with it, then again, your initial assessment may have been well-founded so you put it back on the shelf. The point is, you don’t know until you see what’s hidden beneath the covers.

It’s kind of like that with people too. What you see isn’t always what you get. This past week I encountered three brilliant examples of this very lesson.

Standing in the line for my youngest son’s driving test, I noticed a man, probably about my age sort of hovering near the line. He didn’t look happy. In fact, he looked kind of mean. He was wearing a tight, black, ribbed tank top, black, white, and blue plaid shorts, calf length athletic socks with a black band, and bright white sneakers. He was bald and sported several tattoos on both arms, his back, and neck. In Southern California, this is kind of typical attire for some gang members. When he looked my way I gave him a little of a half-smile and he just looked away.

An hour and a half later as my newly licensed son and I left, I had him pose (begrudgingly) near the car with the

crisp, white paper that would serve as his licence till his shiny, new laminated card arrives. The man happened to be standing two cars away from us. While I was torturing my son I noticed him looking our way, he smiled and gave us a thumbs up and said, “He passed, hu?” I smiled back, “He did!” The man said, “Mine too, you gotta be proud, right?” I started laughing, “Yeah, and a little scared.” We shared a chuckle as I took my place in the passenger seat.

I could have easily judged him. If I’m being honest, in some small way I did. First impressions are a funny thing, I’m a little wary of all strangers. You kind of have to be though. My initial half-smile at him was my way of flipping over the book and checking out the synopsis. It wasn’t terrible, but it wasn’t exactly desirable either. It was just another book in a sea of books. I didn’t fault him for not returning the gesture, everyone looks a little snarly at the DMV. Chances are he was a nervous as I was, and obviously as happy and proud of his son as I was of mine. By the way, his tattoos were totally kick-ass.

A few days later we were walking along the sidewalk when we encountered a very tall, imposing sort of man. He had long hair, brown and beautifully sun streaked with a golden hue. It was pulled up into a sort of messy ponytail bun. He wore ragged flip-flops and pulled alongside him a grocery cart filled with papers and cans and all sorts of odds and ends. There are far too many homeless left to wander and survive on the streets. He was obviously one of them.

Some of the best conversations I’ve ever had were with people who’d found themselves homeless for one reason or another. You have to be cautious though, some of their misfortunes include untreated mental conditions that can lead to unpredictable behavior. This particular man walked with the posture and purpose of a man simply working his way through another day, he wasn’t dirty and disheveled like some.

His jean jacket looked fairly new and his . . . maxi dress was a lovely shade of purple, it matched his bangly bracelets quite well. He was walking our way and we were walking his. He issued us a small curtsy as we passed by each other. My son and his friend both looked at me, “Was that a guy?” I said, “Yep. It certainly was.” Then there was a bit of silence. “Well,” I said, “his dress looked comfy enough I suppose.” Now I’m not a personal fan of men wearing dresses, but I gotta say, I’m not even brave enough to wear a maxi dress. In keeping with the book analogy we’ve got going, I wouldn’t have skimmed through the pages of this one, but I wouldn’t be handing out petitions to have it banned either.

This afternoon, I took my son out for lunch. As we sat in our booth waiting for our number to be called, a man walked in. He had one of those cheery smiles that simply brightened the place up. He motioned for the woman who came in right after him to go ahead, and she caught his contagious smile and thanked him. It felt good to see a little random act of kindness, you don’t see enough of those these days.

He was tall and muscular, his tan work clothes were a bit grungy and rather soiled, I imagined he was a taking a well-deserved lunch break after a long morning of hard labor. His hands bore the markings of someone who’s used them to build and toil to provide for his family. You could see, even on his ebony skin, evidence of long days spent out in the sun. I kind of admired him.

As he approached the line, a large group came in the opposite door and stood behind the woman he’d just given his place to. At first, he didn’t seem to mind at all. I recognized the small crowd readying to place their orders, they were from a local day program for adults with mental and developmental disabilities.

Ordering was taking a bit more time for them than it does for some, and I could see the man looking at his watch

and shaking his head. I’m sure he hadn’t expected such a long wait, but he still had that cheerful smile. It wasn’t until another man stood next to him that I realized his smile was simply a mask and it was heartbreaking. He said to the new man in line, “Can you believe this? I don’t know what they’re thinking bringing them in here like this. They got places for these people.”

By the look on the second man’s face, I thought he was going to say something in their defense, but instead, he nodded in agreement and they shared a laugh. By the time the man had placed his order, the group had all been seated and a few had received their food. One of them, Ted, was a man who looked to be in his sixties and seemed to think it was funny to try and take a sip of all the sodas on the table. The chaperone said, “No Ted. No Ted. No Ted.”

This was repeated more than a few times. The man was looking at them in disgust. He said, loud enough for all to hear, “Damn. How many times you got to say it. No Ted. No Ted. Ted’s a grown-ass man.” There was an uncomfortable silence. One of the chaperones went to the counter to inquire about an order they were missing, the young girl behind the counter was surprisingly rude to her which seemed to fan the man’s ugly flames even higher. He stood next to the woman and said, “You don’t need to be so anal about it, just make ‘em share. They nasty anyway.”

My blood was boiling. There were more things said throughout the fifteen minutes this all occurred, but I think, I hope, you can imagine the scene well enough. The worst thing was the looks on the faces of those beautiful angels, some of them knew exactly what was happening and it was sad. I wondered how many times they had to deal with that same kind of treatment. That man could have made each of them smile and instead he chose to cause them pain.

That book, with it’s bright and cheerful cover was deceiving. He may have had reason to be cross, I don’t know. He may have known he was going to be late and get reprimanded when he returned to work, but that still didn’t give him the right to be cruel. That was a choice.

I try very hard not to judge any book by it’s cover, they can be misleading.

By the way . . . I had a choice in that moment as well, and I chose to simply smile at as many of those precious souls as I could. I gave Ted my stern but loving ‘mommy look’ as he again reached for someone else’s cup of soda. I gave one to the man who lost his mask as well. I hope he understood what it meant.