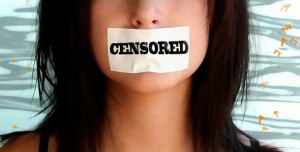 Dear Esteban, may I call you Esteban? You recently left me a bit of a negative comment – Now usually, I just try my best to ignore all the negativity in Cyberland, but I thought perhaps this time I would respond. You seem special to me, deserving of a response. Especially considering you have the honor of being my first, negative commenter, that is.

Your humor isn’t what I wanted to address here though, it’s your attitude, your view of women and how you think they should or should not speak. First of all, I don’t think there is a woman alive who has not said the word peed. People pee and when they do, they sometimes say things like, “I need to pee.” Pee is natural and nothing to be ashamed of. The word pee or the past tense of pee, peed, is not vulgar or unseemly, it’s actually quite an innocent word.

Most guys on the other hand, would have said something like pissed or came up with something else entirely inappropriate. I think if a guy said he almost peed a little over something funny, his buddies would be a little weirded out. I don’t know though, I’m not a guy, and no – I’m not trying to be one of them. I am a woman, one who isn’t afraid to say peed or anything else she chooses or feels the need to say.

I’d also like you to know that I have four children. Four blessed little miracles of life that I had to squeeze out of my . . . gosh, I just don’t know what to call it without offending you – my va-jay-jay-, vagina, privates, lady parts, coochie, cha-cha, hoo-ha, birth canal . . . whatever – So guess what? I may actually pee a little when I laugh. I don’t, but it could happen. Happens to lots of gals.

You know, I was a little pissed – pardon me – upset, when I first read your comment, but then, it just made me sad. Sad that so many women are stifled and silenced by controlling and judgmental men. I don’t think you’re old fashioned, I think you’re kind of an ass.

Funny thing is, I find a lot of things funny, my funny bone is huge, I respect your opinion, and believe it or not, I think there are many women, and men, out there who could use an injection of class. I completely stand behind your right to say whatever you wish to say because I’m always going to say whatever it is I want to say as well.

“Esteban – Moderately funny … I’m not sure when it became “ok” for women to say they “Peed a little?” Maybe I’m just old fashioned, but it seems crass. Women used to be the fairer sex, but it seems like some women are trying to be one of the guys. You’re not. Stop it. Be a woman .”

15 thoughts on “Stop the presses! A woman said *peed* GASP!”